It all started when my Dad took me to the annual National Radio and Television Exhibition, known as ‘The Radio Show’. It was in the early fifties and I think I was 10 or 11 at the time. The BBC stand included TV cameras with cameramen in attendance. This caught my imagination and remained as a childhood ambition.

Fast forward to 1957. I was now attending Hendon Junior Technical College (Yes there was such a thing in those days). My school days were coming to an end and I was looking around for gainful employment. Recalling my visit to the radio show I sent a letter to the BBC. The reply, though disappointing, was helpful. Basically it said go away and get some qualifications and experience!

I applied to a number of companies now long faded out. Pye, Cossor and STC to name some. Fortunately, following an interview I was offered an electronics apprenticeship with EMI, a company connected with BBC TV from its beginnings at Alley Palley. I was always impressed by EMI’s advert on the back of the Radio Times showing their Hayes site on which stood the prototype of the Alexandra Palace TV mast.

Travelling to work at EMI’s Hayes facilities in the late 50’s early 60’s I passed by the TVC site at White City on the central line almost on a daily basis and watched it grow. However thoughts of the BBC were put on the back burner when, following an interview, I was given the opportunity to complete my five year apprenticeship at EMI’s Abbey Road Studios, just at the beginning if the Beatles era (But that’s another story).

With experience gained as a junior engineer at EMI Studios I felt able to embark on my BBC quest once more and applied to an advert for ‘Young men and women for duties in sound technical operations’ based at Broadcasting House and Bush House. (see below) 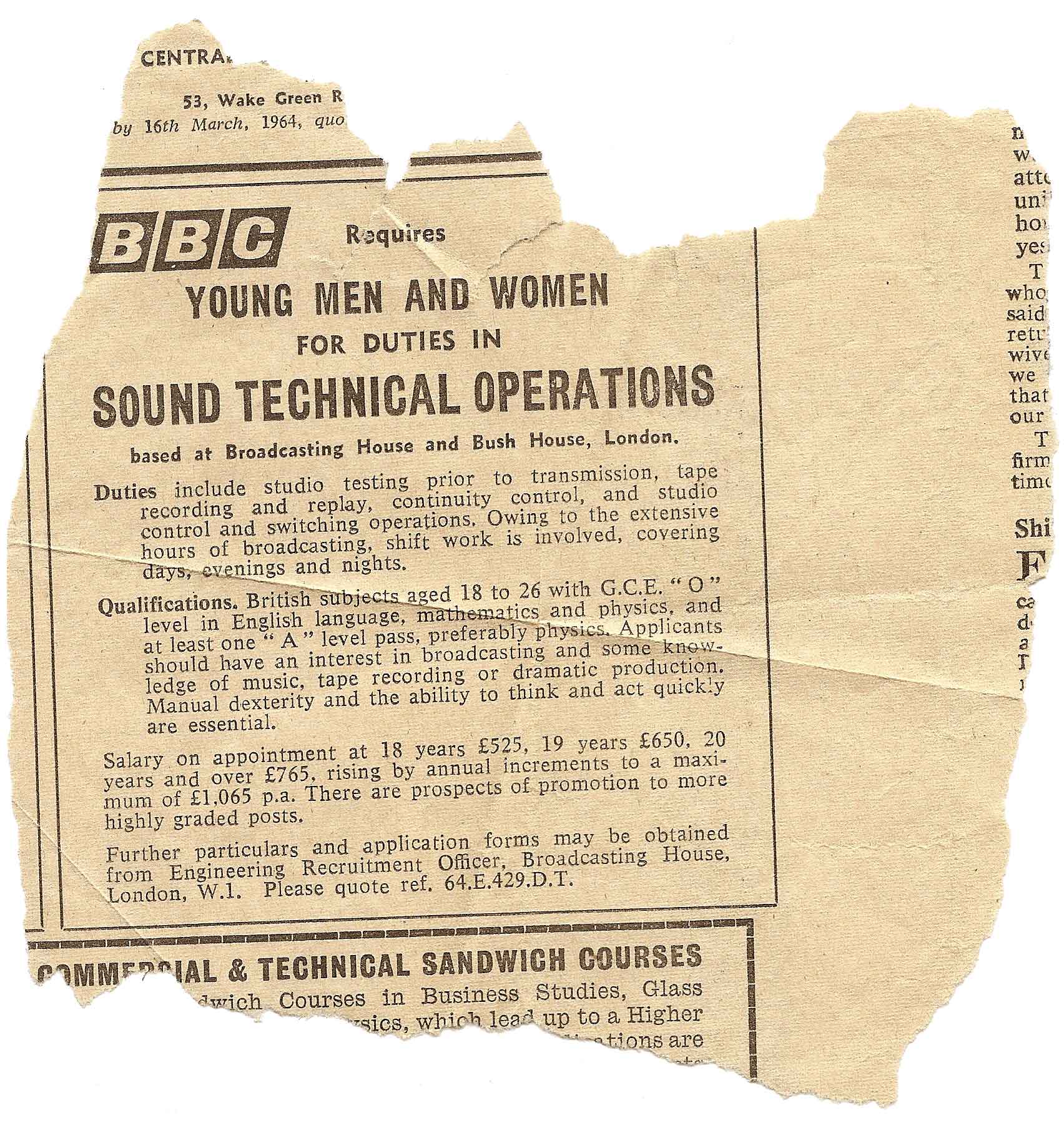 Ultimately I was called for an interview at a room in the BBC offices in the Langham, now returned to its former glory as a 5* hotel. The interview panel comprised 3 people. An Establishment Officer (BBC talk for Personnel or HR), an Engineering Recruitment Officer and, as I recall, a member of the sound staff. I think that because of my recording studio background the interview was especially tough. I remember leaving completely demoralised.

The awaited letter from the BBC duly arrived a few days later on 20th June 1964, and what it said seemed to telescope my childhood imaginings and my schoolboy ambitions into a few lines:

We would like to offer you an appointment to the un-established staff of the Engineering Division as a Technical Operator at the BBC TV centre at the enhanced rate of £815 per annum rising in annual increments of £50 to £1065 per annum.

I had applied for a job in sound and BH. All of a sudden I was being offered a job at TVC. The world of television had opened up to me, and I wasn’t sure why! Perhaps it was, as I later found out, thanks to the increase in staffing needs at BBC TV due to the demands of its new channel, BBC2.

But my journey into BBC employment still had one more obstacle to surmount. Having accepted the offer I duly handed in my notice to EMI, went abroad for a few weeks and returned at the end of August 1964 expecting to take up my position at the beginning of September. Instead, my parents handed me a letter from the BBC which said:

Owing to an unforeseen change in the training programme it will not be possible for you to take up this appointment till the 20th January 1965.

I wasn’t too happy about this. After all I’d left a good job, and at 24 years of age I was hungry to start my new one. I decided to push to join on the originally agreed date. Eventually I received a further letter stating:

…it has exceptionally been agreed that our offer of appointment dated 18th June should be confirmed, and you should report as indicated therein.

I reported for duty at the Television Centre on 14th September 1964, the only member of my intake to do so.

As a new member of the Technical Operations training reserve I was told to report to the Senior Cameraman on camera crew 9 who were on duty at the Lime Grove Studios. In those days a camera crew comprised camera and sound staff and I was allocated as a sound trainee. I was equipped with the ‘Ration Book’, which was a guide to the areas to be covered during initial training and had to be signed off by a crew member as each element was successfully completed.

On arrival at Lime Grove I was in for a disappointment as the crew had been stood down and my first day at the BBC became an off duty day!

The following four months involved working and gaining invaluable experience with both sections of the crew. Then finally, at the beginning of January, I joined the rest of my intake at the BBC Engineering Training Establishment at Evesham for a 3 month residential course (TO21).  (See below.  Course photo. I’m front row 2nd from left). At the end of the course exams would be taken in which ‘success was essential’. Having overcome this hurdle, successful members of the course took up their postings across the BBC regions. As one of them I returned to London to resume my BBC career. 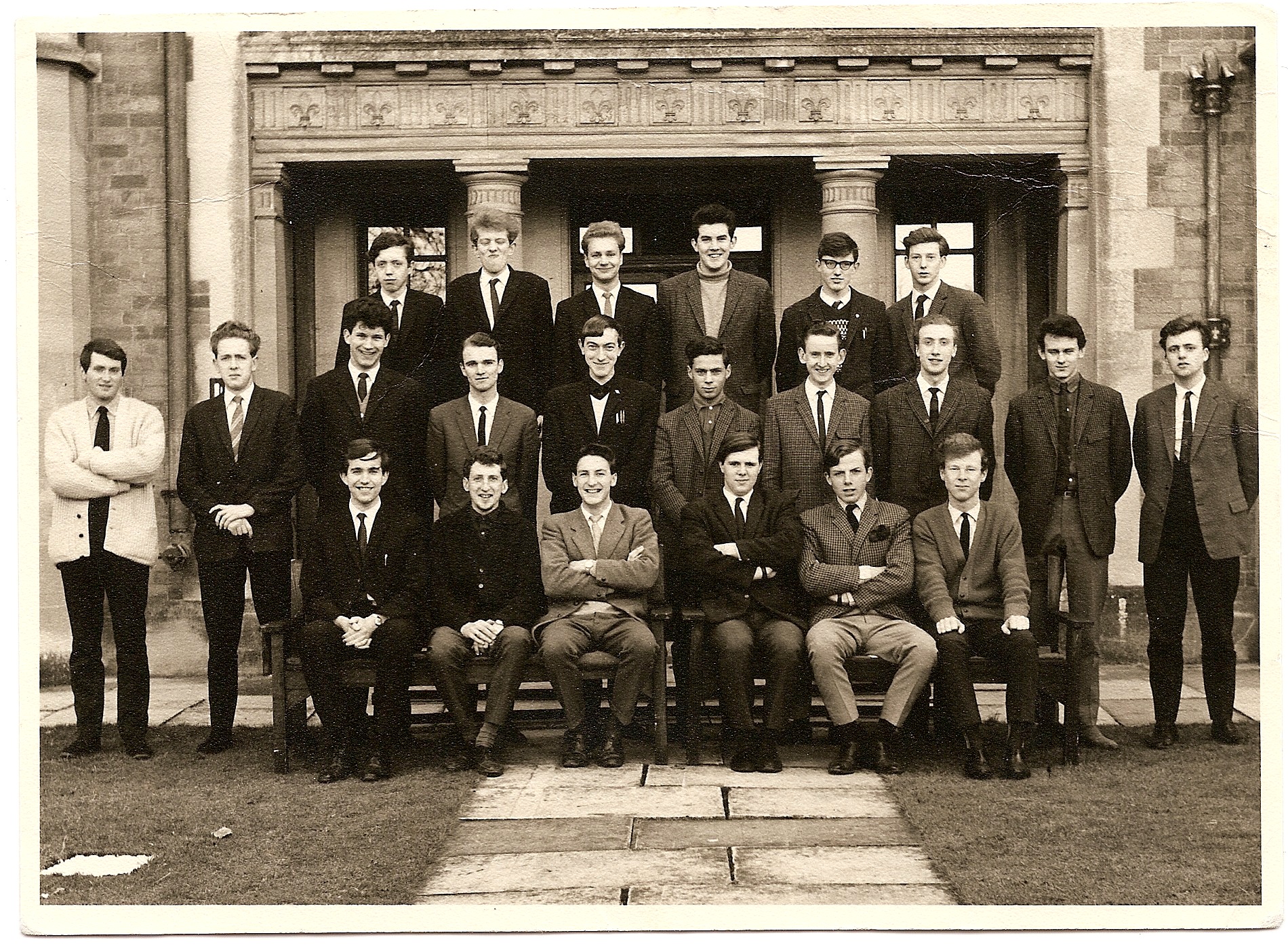 In those days your career progress was overseen by managers and heads of department. I was able to move from sound to cameras and then through the various camera assistant positions, which rejoiced in names such as ‘crew relief mainly cameras’ and ‘dolly ops’ 3, 2, and 1. One of the duties of junior crew members was ‘cable bashing’ which involved ensuring that the heavy camera cables didn’t drag along the studio floor or snare on nearby equipment ensuring that camera moves were smooth and noise free. As a dolly op, or tracker, I drove camera cranes such as the Heron, Mole, and Nike. I particularly remember the fast movements between sets on live drama, and tracking the Nike camera crane at speed down the line of dancers on the Black and White Minstrel Show.

I was finally promoted to Cameraman in 1971, after 7 years at the BBC. This came at a time when crew sizes were being enlarged to include an extra cameraman following union intervention to allow for promotion opportunities. My position was camera 5 on crew 15. In those days there were 20 camera crews based at TVC.

In 1973 I transferred across to the Lighting and Vision section to pursue an increasing interest in lighting. During my period as a Vision Operator I returned to Evesham to complete a Senior Technical Operators course at the end of which there was another exam to pass. This was necessary in order to gain further promotion into supervisory roles.

In 1976 I gained a place on the sought after Lighting Training course which involved several weeks at Evesham culminating in 2 to 3 months back at TVC, lighting productions supervised by tutors ( TM’1s as Lighting Directors where known in those days). This was followed by promotion to Vision Supervisor, a post which I stayed in for 10 years. Finally, following a successful board I was promoted to Lighting Director in 1987.

I will always remember the day I was notified of my promotion. I was working in the TV Theatre on a Wogan show when the Head of Lighting and his deputy came into the lighting gallery to give me the news personally.

I retired aged 60 in 2001 and continued working as a freelance Lighting Director both for the BBC and in the wider television world.